A few thoughts on patriotism 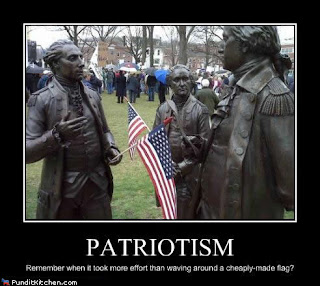 A friend showed me this picture, and it got me thinking.. what today is patriotism? Has it just degraded to a bit of flag-waving, maybe hanging out a flag on the 4th of July, perhaps buying a memorial poppy from the VFW on Memorial Day? Or is it doing what you can for your country, like joining the military - not for 'what it can do for you' as is advertised nowadays, "build a college account".. but to actually prepare to fight for the honor and safety of your country. I've started reading the Federalist Papers, quite interesting reading. Hard to get back into deep reading, after a hiatus of thoughtful reading, and only reading fluff for a while.

When I joined the military, I took this oath:

But I'm starting to think about this congress, and senators. What if they are doing what is not for the best of the country? I'm not talking armed revolution, I'm talking its time for the good men and women of this country to stand up, to NOT sit around on their rear ends, and just shake their heads, thinking nothing can be done. Look at the tea parties that happened April 15th. CNN, MSNBC, covered them as "people outraged with the democrats". That isn't correct. It was people outraged with Republicans and Democrats, and the hard swing to the left that both parties have taken. Neither party is center. Democrats may say "right wing extremists" in derision, however, they are to the left of center, as are the Republicans, who are only a little to the right of Dems. McCain was only a little bit LESS Obamaish than Obama himself.

I believe the founding fathers are spinning in their graves at the state of the country today, and the state of the inactivity of the people as far as politics go. Most are more interested in their television and American Idol than they are on what's going on in their government.
Posted by Diane at 11:33 AM