Summer is on its way!

Wow it's nice outside today! I went out to plant, and it was like being bathed in a nice warm airstream. Not too hot, not too cold. Just right. Why am I inside telling you this? Because I have to figure out what to fix for dinner *grin*

I planted ranunculus today, and my caladiums are starting to come up finally. I guess I planted the bulbs too early. The dirt wasnt warm enough, so I will plant some more later on today after I peer into the freezer to see what is available.
Posted by Diane at 1:56 PM 1 comment:

Email ThisBlogThis!Share to TwitterShare to FacebookShare to Pinterest
Labels: gardening

Is it really FAIR? Yes or No? sound off

And people STILL go on about "the rich" not paying their fair share. Who is considered rich for these purposes? the people making under $100,000. That isn't a whole lot. People like to throw around labels like "rich" "the poor" etc.. but we need to actually TAKE A LOOK at who is paying what.. and is this actually FAIR. Is it fair for a person who makes more to pay a higher percentage than someone who makes less? NO. Why, you might ask? Let's take a different tack on that - should they pay a higher cost for their food, their gasoline, everything they consume because they make more? Should their laundry soap cost more because they make more? Should their dog shots at the veterinarian cost more because they make more, and can afford to pay more? Am I being silly? No. I'm merely taking the sick reasoning that you are saying that "they are not paying their fair share" and applying it to everyday life.

A flat tax is fair for everyone, and a sensible solution. A 17% flat tax, would bring in more revenue for the government, and it would really make the tax code much easier. A flat tax would level the playing field for everyone. 17% of 30,000 is much less than 17% of 100,000. See what common sense can do for one?
Posted by Diane at 11:50 AM 2 comments:

This weekend's activities are here

This seems to be what I'll be doing this weekend, up in Groveton, TX.. The Davy Crockett Bear Chase. I'll be doing the Bear Chaise if anything :P Pictures will follow, as I get them uploaded to the computer. But it sounds like fun, nonetheless.
Posted by Diane at 8:24 PM No comments:

Email ThisBlogThis!Share to TwitterShare to FacebookShare to Pinterest
Labels: weekend

This woman who drove into a line of cars while texting during driving..and killed a woman. She recieved a sentence of 6 years..and plans to appeal? what's her basis for that? "I really didn't mean to?"

She had been seen previously, texting while driving. People! ya gotta pay attention! Just ignore stuff while you're driving. I backed into a post while the kids were fighting in the back seat, and because I wasn't paying attention, BOOM!.. and the truck has a dented bumper still :P

I talk on my cell when I drive.. but I dont pay much attention to the phone. I've driven behind people who are leaning over into the passenger side, with a cell phone stuffed up against their ear, (how can they drive sideways like that?) and they're doing about 10 mph in a 30 zone. Why don't they just PULL OVER and get out of my way!

http://www.redding.com/news/2009/apr/04/shingletown-woman-sent-to-prison-for-text/
Posted by Diane at 4:41 AM No comments: 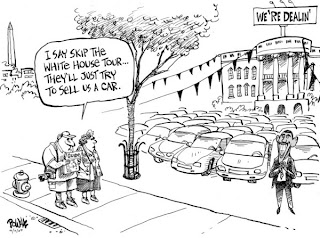 I saw this cartoon and thought how true it's going to be..

To promote the sales of GM vehicles, Obama says the government will stand by your GM car warranty. And all the taxpayers will get a lube job. The new GM owner's manual will come with a disclaimer: "Close enough for government work."
Posted by Diane at 11:30 AM No comments: