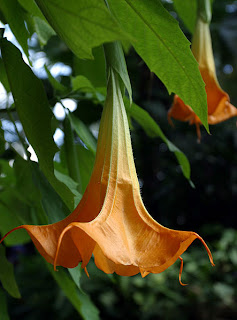 I just got myself a NEW brugmansia! To those who don't know what a brugmansia is, it's an Angels Trumpet, Devils Tree, also known as a datura tree.

I have a peach colored one, a yellow one, and I just acquired a purple one, that the blooms poke UP instead of the usual hanging down. There is a house on Avenue H that has one, and I loved it the minute I saw it, and I had been looking for a source for them for quite a while, locally..and I have since found one, one town over - they grow their own from seeds! And they're not expensive.

When I was up in Medford, Oregon, in an 8b zone, I was calling around nurseries attempting to find a brugmansia for the yard.. found one, yet the nursery owner was *very* suspicious as to why I was wanting one - they are evidently hallucinogenic. Also TOXIC. I just think they're drop-dead gorgeous!

On another note, I purchased an Althea (rose of sharon) tree - in the hibiscus family - a double white - when I get my film developed, I will have pictures. I have not decided where I will plant this one - I have read that it seeds freely, and those little seedlings grow like crazy, so I think I will plant it along the driveway, and make a hedge of them ! keep those cars straight on the driveway, so we don't back into the ditch like hubby and I *both* did one year! The first time our neighbor had to pull us out, the second time, the truck backed in, and I used my V8 station wagon (with the tail-gunner seats) to pull out the truck.
Posted by Diane at 12:40 PM