Well, tonight is the last night of AWANA, awards, then store, and then refreshments. Tomorrow I'll be jetting off to Medford, to go stay with my mother-in-law for a few weeks. She's having surgery the day after I get there, so she'll be off her feet (or at least on crutches) for a while.

There's been lots going on in the news, but to me, Geithner raiding the pensions and putting in government IOUs stands out as a big thing. That OBL shenanigan, I believe he's been daid for years, as all the purported videos of him since early 2002 have been frauds. Notice the obviously fake birth certificate is no longer in the news.

They are doing sleight of hand with the American public. Look here at my left hand, so you don't pay attention to what my right hand is doing.

Yet another biggie is what the Supreme Court has STUPIDLY, PILLOCK-BRAINEDLY, VOMITROCIOUSLY, decided.

...(t)he Kentucky decision "would create unacceptable and unwarranted difficulties for law enforcement officers who must make quick decisions in the field, as well as for judges who would be required to determine after the fact whether the destruction of evidence in response to a knock on the door was reasonably foreseeable based on what the officers knew at the time."

Hello? Fourth Amendment? I guess being the TSA, through regulation, has knocked so many holes in it, that it's going the way of the Tenth Amendment.

The right of the people to be secure in their persons, houses, papers, and effects, against unreasonable searches and seizures, shall not be violated, and no Warrants shall issue, but upon probable cause, supported by Oath or affirmation, and particularly describing the place to be searched, and the persons or things to be seized.

Speaking of idiocy, over in Indiana, they're a bunch of retards too. (note.. I am not PC, and don't think I ever will be. I'm a blunt speaker, and I say what's on my mind (much to my husband's chagrin) If it's stupid, it can also be retarded.)

The brilliant minds over in Indiana (are they inbred there? Buck-toothed? Any teeth? Do they marry their sisters over there?) decided this:

In a 3-2 decision, Justice Steven David writing the official response for the court stated, if a police officer wants to enter a home for any or even for no reason, a homeowner or any other person can not do anything to resist or block the officers entry into a private home. “We believe… a right to resist an unlawful police entry into a home is against public policy and is incompatible with modern Fourth amendment jurisprudence,” David said. “We also find resistance unnecessarily escalates the level of violence and therefore the risk of injuries to all parties without preventing the arrest.” David Goes on saying a person arrested following a unlawful entry by police can still be released on bail and will be given ample opportunities to protest the illegal entry through the court system.

I would like to fill a small lunch bag with cat poop, put it on the idiot's doorstep, light it on fire, and ring the bell, then run & hide. Hopefully the moron would come out barefoot, and step into the same stuff that this ruling is made out of. Except the ruling is more bovine than feline.

I hadn't thought about flying, otherwise I would have gone to Zazzle.com and bought a Gadsden flag Tshirt to wear to the airports. My Tshirt that says "I love the smell of tar and feathers in the morning" has some holes in it. Guess its' time to replace!

As to the Geithner thing, figure as soon as they run through the money in government pensions, guess where they'll go next? Your IRA, your 401k, your anything that they can get their grubby mitts on.
Posted by Diane at 11:00 AM 1 comment: Links to this post

Tomorrow night (5/18/11) is the final night of Sparks (AWANA club) - first awards, then store (where the kids get to spend the "bucks" they earned by attending, bringing dues, wearing their uniform, bringing their bible/handbook, and learning their verses); and refreshments. Being I was feeling all invigorated yesterday for some reason, I made a batch of peanut butter cookies. DANG those were tasty! So, for refreshments, I'm going to be making more cookies:

Mix sugars, peanut butter, shortening, butter and egg in large bowl. Stir in remaining ingredients. Cover and refrigerate about 2.5 hours or until firm. (I skipped this, and went directly to rolling them). Heat oven to 375ºF. Shape dough into 1 1/4-inch balls. Place about 3 inches apart on ungreased cookie sheet. Flatten in crisscross pattern with fork dipped into sugar. (stick the fork first into the dough, so that the sugar will adhere to fork) Bake 9 to 10 minutes, cool on rack. If you don't want them to get soft, don't leave them out (also they tend to get eaten quicker if you do)

OATMEAL SCOTCHIES (we love these!)

Mix cinnamon, flour, baking soda and salt together in a small bowl. In another larger bowl, beat both sugars, butter, eggs, and vanilla extract together till well-mixed. Gradually add flour mix. Then stir in (carefully) the oatmeal, and then the chips. Drop by rounded teaspoonfuls (I find ice tea spoons handy for this) onto a baking sheet (ungreased). Bake 8 to 9 minutes. Less for chewy, more for crispy.

Hubby didn't think he'd like those, but he did. A whole batch...downed in one evening!

And then I'm making toll house cookies - recipe is on the back of the package. This time I bought the mini chocolate chips. Maybe it will look like there are *more* chips than usual.. even though the amount of chips in the bags of regular & small chips are the same by weight.

Also making cupcakes, Funfetti ones, with vanilla frosting & rainbow sprinkles.
Posted by Diane at 12:30 PM 4 comments: Links to this post 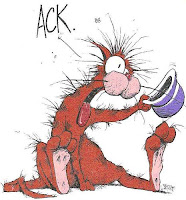 My whole long post, on what is going on! has! disappeared!

Here is the gist of it - ASK questions re: the OBL shenanigan. We're just supposed to take the government's word for it? No corpse, no photos, basically "we said it happened, just believe us, we're the government, we wouldn't lie to you".

On another note... WHO would you like to see waterboarded? I vote for Joy Behar and the rest of the harpies on the View, first. :)
Posted by Diane at 11:00 AM 2 comments: Links to this post