I hope your Thanksgiving was good - we had turkey, stuffing, roast parsnips & sweet potatoes. Lots of leftover turkey, and the stuffing is already gone. Actually went to Walmart today to get the difference back on a new camera I purchased, because the price went down. They don't give you the difference...they require you to bring in the product, return it, then buy it again at the lower price. For those of you who overstuffed yourself on turkey & fixings yesterday, here is an appropriate song:

you went to the supermarket got your turkey wrapped in plastic
cooked it in the oven just right should come out fantastic
the whole family’s coming over you put on your evening gown
but creeping up behind you all moist and golden brown
it’s the zombie turkey coming to pay you back
you run up the stairs into the bathroom lock the door
you can hear her boney legs banging on the floor
she’s coming ever closer now, you look out the window to see
an entire neighborhood overrun by zombie turkeys
they are zombie turkeys and they’re coming to pay you back
she’s banging down the door now it looks like there’s no escape
you can’t outrun her because you’re fat and out of shape
if only you exercised more, ate less, you’d be thinner
what a terrible way to die to be eaten by your dinner
by a zombie turkey who has come to pay you back

What does it entail?

What do police do for a pat-down? I've seen pat-downs on TV, but generally, what does a standard police pat-down consist of? And is it a more intense one if you are putting them into jail?

I'd appreciate finding out. I'm leery of going to the local PD and asking them what their procedures are, and then over to the county Sheriff's to find out what their pat-down procedures are for those in striped pajamas. (and yes, in this county, they wear black & white striped PJs)
Posted by Diane at 10:14 AM 1 comment: Links to this post

Well, with the Nude-O-Scans in use at the airports, including the 2 I am going to be flying out of in April to head to the Boston Marathon *hubby qualified for it, is registered, we have our flight & hotel already booked*; I am seriously wondering *how many* get the SSSS on their boarding pass...And by refusing the dick measuring device, you get an "enhanced" patdown, which includes inside your waistband, touching the genitals, and not anymore back of the hand across the breasts. I'm wondering how police run their pat-downs before throwing someone in the back of their car. Is it more or less the same?

The right of the people to be secure in their persons, houses, papers, and effects, against unreasonable searches and seizures, shall not be violated, and no Warrants shall issue, but upon probable cause, supported by Oath or affirmation, and particularly describing the place to be searched, and the persons or things to be seized.

I don't mind going through that metal detector. It doesn't pick up the 3 staples I have inside me from my gall bladder removal (xrays pick it up though. looks funny!)

I don't mind my soon to be 18 year old daughter going through the metal detector. I do have a thing about her going through the virtual strip search *yes, those pictures are able to be saved, and transferred to another machine*, or being groped by some TSA goon.

The "enhanced" pat-down does not involve the back of the hand. it's fingers & palms, prodding you places only your gynocologist should be, or your doctor as a guy turns his head & coughs.

They've "decided" in their wisdom that 12 and under do not have to go through the Nude-O-Scope. How generous of them. What about those ages 13 up till they're 18? It's still illegal to view naked children, or take pictures of them. Also while going through there, you don't have view of your belongings (all of it, including wallet/purse, Ipad etc) on the belt.

People say "flying isn't a right - take some other transportation". Since when does MY purchasing a good from a company (an airline ticket) give the government the right to do a virtual strip search without any cause?

There is the National Opt-Out Day on November 24th. People will be opting for the patdown vs. the virtual strip-search. If you are flying that day, get there *extra* early, as I suspect the lines will move slower than they usually do on this day.

Oh, by the way, there are 2 different types of machines - magnetic wave, which produces a scan that you can't see the goodies in detail; and the backscatter xray, which *does*. With the backscatter, they can see your surgery scars on you. I suggest writing "f*** you" on yourself with a sharpie, if they can see your scars, they will be able to read your message to them. I am not sure if a black sharpie or a metallic sharpie would be best for this. Or cut out letters from foil and taping them on yourself to spell that out. And consider giving them a rude gesture with both hands while they are strip-searching you.

The TSA has a blog, written by "blogger bob" (such a nice generic name), and many questions are asked - but none are answered. Also lies and damn lies are posted on that site, as in "our machines cannot transmit, save, or print any pictures". The representative for the company that makes these machines says they can. "oh yes, believe everything the government says, they are only here to help you." 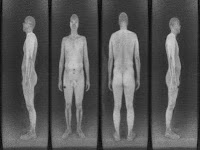 I really don't see why or even *how* people rationalize this. There have been suggestions for males that are Scots, drink Scotch, or even watched the movie Braveheart, wear a kilt.. just as they do back there...going commando. On the TSA blog, one poster asked if they could be taken to a private room, strip naked, and not have to be touched. No way, said TSA. You have to be subject to pat-down.

Again, how is this "reasonable"?
Posted by Diane at 8:40 AM 4 comments: Links to this post

Elections are over now

And Houston voted to get rid of the red light cameras. WOOHHOO! Each time I went under one, I'd wonder how many people flipped the bird to the camera as they went through a yellow light.

Proposition 19 did not pass in Kommiefornia. But the idiots got Jerry Brown in as governor.

Houston, where Bill White was the mayor before Annise Parker, got more of the vote in Dallas, and not much in Houston. Perry carried Houston.

For your viewing pleasure - this is the cat that is in the Fresh Step cat litter commercial, about how 'cats love boxes'.

More news out of Oklahoma about their outlawing of Shari'a law - CAIR (the unindicted co-conspirator of Hamas), is filing suit to have it ruled null and void. If they're "moderate", why should they not mind if shari'a is not the law? and with "moderate muslims", doesn't that imply merely by the word "moderate" that there is something inherently dangerous in Islam?
Posted by Diane at 10:37 AM 2 comments: Links to this post

These are some photos from the game against Bloomington...we won.. 59 to 12. They did not score until the 4th quarter - and it was their homecoming! 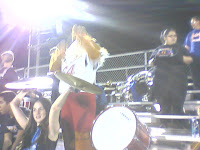 Darn. My internet has been really BAD these past few days.. so one picture is all you get - Louie the Tiger, and the youngest of mine on cymbals. She is in Colorguard, hence the uniform.
Posted by Diane at 5:08 PM 1 comment: Links to this post

These are some photos from the game against Bloomington...we won.. 59 to 12. They did not score until the 4th quarter - and it was their homecoming!

Darn. My internet has been really BAD these past few days.. so one picture is all you get - Louie the Tiger, and the youngest of mine on cymbals. She is in Colorguard, hence the uniform.
Posted by Diane at 5:08 PM No comments: Links to this post