Well.. I am rather glad hubby did NOT qualify for the Boston Marathon this year, as on Boyleston Street, is where I (and last year my  youngest) watch the race. And it would be about the time that hubby would be coming in, crossing the finish line.  God is so good!  Although hubby was upset about his knees, God works in ways that we have no idea of, and no realization that it's for our (sometimes eventual) good.  Monday his co-workers were coming by his desk, calling him, and emailing him, to make sure he wasn't at the Marathon again this year.

I was watching the news a while ago, and this picture recently came to mind from a conversation about President Pookie and Vladimir Putin: 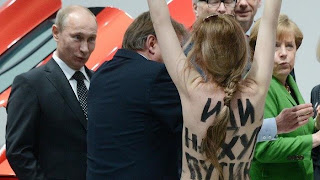 Femen was protesting, and it appears that Putin enjoyed it hahaha! I don't even remember what they were protesting, it's just that Putin's expression struck me as funny.

Just to make Bobby G.hungry (go visit his blog at http://the-pa-in-connection.blogspot.com/ - he posts every day, and more than my hit-or-miss postings!), I was looking at my Facebook, and the preacher's wife had posted this lovely picture of mini muffin corndogs! It looks easy, tasty, and something you can do with your small children (or grandchildren), and that they would enjoy:

In a separate bowl, combine baking soda, cornmeal, flour, and salt, and stir to combine. Whisk into wet ingredients in two batches.

Spray a mini muffin tin with non-stick spray, and spoon 1 Tablespoon of batter into each mini muffin cup. Place one hot dog bite into the middle of each cup.

Bake for 8-12 minutes (oven temperatures vary), or until cornbread is golden brown. Cool in mini muffin tin for 5 minutes before serving. Store leftovers in the refrigerator, and re-heat for 20-30 seconds before serving.

Hubby is attending the ODTUG (Oracle) computer conference this year, in New Orleans - I am going with, and I'm looking forward to getting back there again.  We were last there (for a previous conference) in May 2005, a few months before Katrina hit.  I'm hoping the knitting/yarn store is still there on Royal Street, plus I plan on spending a full day at the WW2 Museum there. Last time we were there I spent a few hours, got to talk to a man that had been at the D-Day invasion of France, and they were planning on expanding into the Pacific theater in the coming years.   Their website is http://www.ddaymuseum.org/  They have an exhibit on POWs in Germany while we will be there, I am looking forward to seeing that.

For your entertainment, here is the link to the gift from Houston that keeps on giving - the Congresswomaaaaaaaaaaaaaan! Sheila Jackson Lee - audio of her: http://michaelberry.iheart.com/pages/SheilaJacksonLee.html

Did you know we still have a N. Vietnam and a S. Vietnam?  Enjoy, and get a hearty laugh...at one of the people that keep getting elected to DC.

Posted by Diane at 3:54 PM 3 comments: Links to this post

The Grand Jury Report from the Kermit Gosnell trial is online.  You really need to go read this:

I really haven't much more to say about this.. but that while everyone is so up in arms about the eeeevils of "scary looking" guns, we (I mean as a country) allow this to go on, and more than just in the hands of this ghoul.  Every abortion kills a baby, and here is some lovely statistics from the right arm of the Planned Parenthood - the Alan Guttmacher Institute:

Oh yes, "safe, legal, and 'rare'" my eye! roughly 50% of all yearly abortions are *repeat* abortions for the women having them.

Wow.. Hitler would be proud! So would Margaret Sanger, whose goal in starting Planned Parenthood, was to curtail the "undesirables".

According to the President after Sandy Hook:

“No law or set of laws can keep our children completely safe. But if there’s even one thing we can do, if there’s just one life we can save, we’ve got an obligation to try.”


Funny, I guess just *some* forms of killing children are okay, while others are not.  This quote comes to mind:

“All animals are equal, but some animals are more equal than others.” ― George Orwell, Animal Farm

EVEN if you don't live in their state.. call these backstabbing, cowardly TRAITORS. Go to their official website and contact them. I've contacted Senators and Congressman who are not of my state, to give them a piece of my mind - or to commend them for doing something right.  Let them know where people stand on this gun control issue. It's a matter of "do my rights come from the government, or are they already there before the government?"

Lindsey Graham, on his site, http://www.lgraham.senate.gov/public/, he says, "I welcome the debate on gun control.  The American people deserve to see where their elected representatives stand on the Second Amendment."

Well, go over to his site, and give him a piece of your mind for being such a wishy-washy, namby-pamby, spineless pathetic little creature.  And I am being *nice*! As for the rest of them, they're just as bad.  RINOs, all of them. CINOs also. (Conservative in name only).  I've pretty much switched to the Libertarians, because the Republicans are just jogging toward, while Democrats are running as fast as they can to socialism.


On another note, there is a certain trial that is going on, that the MSM isn't covering, because it's the liberal religion of abortion being played out - "Dr" (and I use that term loosely) Kermit Gosnell.  Why is it not being splashed all over front pages everywhere? This ghoul killed quite a few (over 100) babies that were 'late-term abortions' AFTER the baby was actually born, killed a woman, plus is working - guess where- in a minority neighborhood.  Margaret Sanger would be proud.  A chamber of horrors indeed. You can read more about it here, at the Washington Times. http://www.washingtontimes.com/news/2013/apr/11/editorial-chamber-horrors/ .


What's the difference of a few inches? I guess it really doesn't matter to the left's religion of abortion on demand.  What they don't get, is that you *made the choice* to have sex, and golly gee, what happens after that? Also funny how the left is not for the death penalty, but is for killing unborn children.  Weird ideology, the left has.

I'm making Chicken Spaghetti for the fund-raiser lunch tomorrow after church, there are quite a few going to camp this summer. Last year we had almost 50 going to camp, and ended up renting a bus to take them to camp and return from there.  Not sure how many are going this year.  Make sure you support your youth at church!