D Day - A Day of Remembrance 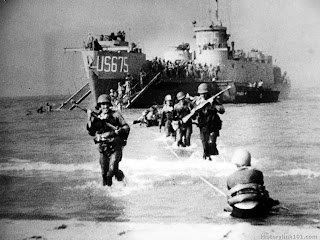 Swimming through a rough surf swept by machine gun and mortar fire, Coast Guardsman carried a guide line to the beach of Normandy on D-Day and survived heavy Nazi fire that mowed down many soldiers following the line to the beach. This photo depicts how the soldier wrapped the end of the line around his middle and served as a "human anchor" in the midst of enemy fire. Of the 36 invaders who attempted to follow the line ashore, only six made it. Meanwhile, the ramp of the Coast Guard-manned LCI had been shot away by shellfire.

While my husband was at a computer training conference in New Orleans in June of 2005, I went with him and we stayed at the Sheraton on Canal Street. Walked about 8 blocks to the D Day Museum there in NOLA, the place was amazing. It takes you at least a good 4 hours to go through there, better if you plan on spending a full day. They had WW2 vets as docents, and at the D Day map, I had the privilege to talk to a man who had been there on the beaches. At that time, they were going to add on a Pacific theater wing. That should be built fairly soon, if not completed; I want to return to that museum and spend the day.
Posted by Diane at 1:32 PM