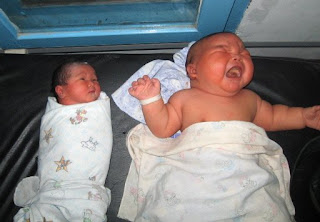 A woman in Indonesia gave birth to a - get this - 19.2 lb - baby boy. For those of you on the metric system, that's 8.7 kilos. She had him delivered C-section, he's 24.4 inches long (62 centimeters). He's heavy, but not that tall.. my oldest was 22 inches long when she was born. He's just BIG. This was her fourth baby, the only one not delivered by midwife. The mother has diabetes, and according to the American College of Obstetricians and Gynecologists, when a diabetic mother's glucose level is high during pregnancy, the baby can receive too much glucose and grow too large.

And I thought my almost 9 pound babies were big. They fit right off into medium baby clothes, the small stuff I had bought was too tiny for them.

We had our first at the Navy hospital in San Diego. Cost all of a tad under $17 to have her, including my 3 day hospital stay. Totally put us off having babies in a hospital. Second one we had at a birthing center, with a midwife. If we had more, that would have been the route we would go.
Posted by Diane at 7:14 AM