Driving around a small town 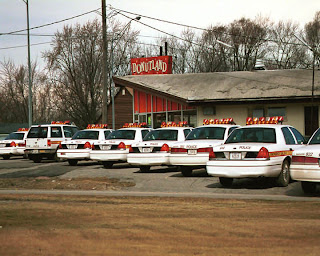 Its gotten so bad driving around our town lately. The posted speed limit down the main drags are 30 mph, 35 in some spots, but you're darn lucky if you can get going over 20 mph! And that is on the 2 lane roads. What is it, an influx of Sunday drivers? I've noticed it for around the past 3 months.. is it just me, driving the speed limit is going *too fast*? And it's not just old people, or people talking on their cell phones either. It's younger people too, driving 10 miles below the speed limit when it's 30 for pete's sake! Just doodling through town, when I have somewhere to be.. like ANYWHERE but sitting behind their slow-moving vehicle!

On another note, the local speed trap out of town going west, has been plagued lately by the DPS, one sitting on either side of the bridges. There are a couple of bridges just out of town that *feel rural* so you go faster than 55, and that's where they nab you.. and in this little town, not necessarily with DPS, but with the city police.. if ONE pulls you over, there's more likely than not to be one or two more pull up to chit-chat with the one that pulled you over to find out what's going on if it's a slow day. So you can have a traffic stop, with three cop cars. All blue blinky lights, and then traffic going by, goes EVEN slower than 20, because of the rubberneckers "let's find out who's stopped, see if we know them!" it crawls down to around 5 or 10 miles an hour.

What has gotten into people lately? It used to be you could get across town in 7 minutes tops. Now it takes 15 minutes to get from Dairy Queen to Walmart!
Posted by Diane at 2:28 PM

Email ThisBlogThis!Share to TwitterShare to FacebookShare to Pinterest
Labels: drivers