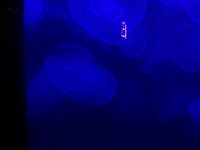 We went to the Houston zoo on January 2nd, and I got some pictures. This is the jellyfish tank at the aquarium in the zoo. We originally were going to the museum of natural history (HMNS) but could not find parking anywhere near it - but we found parking at the zoo lot, so we went there instead. In the Reptile House is the albino alligator - they have one at the New Orleans zoo also - they are nestmates - If I remember right, there were like 5 or 6 albino alligators from one nest - and they were parceled out to zoos. We didn't see the rhino (thank goodness), but we did go to the children's zoo section. They have a building now where kids can bring in things from nature, and earn points to trade for various things, even bobcat skulls. I'll stick with my bobcat skull that's on my desk here (from the neighbor's hunting). Although I have to glue some of his teeth back in his head, the little ones are starting to fall out. When I went to the New Orleans aquarium in 2005 (before Katrina), they had two or three jellyfish tanks, with different types of jellyfish in them. It was really neat, and they had seahorses and sea dragons. I had never seen a sea dragon before, I think a salt water tank with some would be fun to have.. (but still hard to maintain!).
Posted by Diane at 6:19 AM