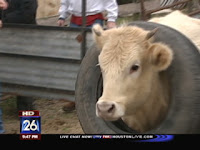 An unusual site near Willowbrook! Viewers e-mailed and called us here at FOX 26, to alert us about an animal that had them doing double-takes.

At first glance, it looked like a typical cow pasture. Then, when you look just a little further- what do you see? A beautiful little blonde yearling with a car tire stuck around her neck.

"Cows get very curious and tend to get themselves in just a little bit of trouble," says the cattle caretaker, Tom Dieho.

He watches after the cattle, since their owner had a serious accident. He says the cows are the love of the other guy's life, so he tries to take good care of him. He rushed to the pasture, when he found out about the calf's conundrum.

"Just so happened there were some tires here laying around the calf. She got it around her neck just being curious", Dieho told us.

Other cows weren't so sure about her new accessory, but but were certainly interested in "what in the world" it was.

They surrounded her, sniffing at the tire, while others butted it with their noses. Apparently, it's not just cats that are curious.

Other cows weren't so sure they even wanted to share hay with the tire-clad calf. They nudged her out of the way and she stumbled off, forlorn.

The SPCA also came to the rescue. Along with Dieho, they were able to corral the calf and what goes on, must come off. They were able to pry the tire right off of her neck.

Her cow comrades closely watched the action, and now it's time for her to mooooove on.
Posted by Diane at 6:39 AM