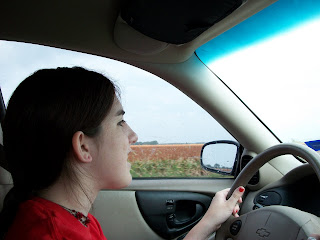 Oh no! She's behind the wheel, and she's ready for her drivers license. All that remains is digging up the necessary paperwork, and bringing it down to the DMV. Are all DMV workers so cheerful and perky? At least I do know some DPS have a sense of humor, as the time my tank *ok so it was one of those station wagons with the rear-facing seats with a V8* lost power, and the power brakes don't work without power, I was standing on the brakes, and plowed into the convenience store, right into his wall and knocked down his cigarette rack. There were still packs dangling and dropping occasionally when the DPS arrived. More damage was done to the wall than to my car. They got a good chuckle out of that, actually both of them were laughing about it with each other (I think about women drivers!) and said I'd have to get a ticket anyway. They drove us to the hotel down the road about 10 miles so we could stay the night and arrange for a tow truck to come get my tank. I looked at the hood the next day. A headlight was broken out, and there were a few dings where cement blocks had fallen, and I didn't know the grille was not metal, apart from that, not much damage to the beast. The owner of the convenience store was NOT amused. He was screaming and pointing in a foreign language, and was very upset. He got a new wall out of the deal however, and I noticed there are posts in front of that wall now, every time we pass that exit off to Wharton we grin.
Posted by Diane at 12:23 PM