While browsing the net...

I found some good stuff today at The Hill, TheHill.com, which basically showcases the DC nutters in one spot.  Lots of good reading there, and you find out what the roaches are trying to do when they scuttle about in the dark.

I came across this short piece by Armstrong Williams, titled, The Intolerant Far Left, quite truthful:


The far-left liberals in our society claim to have the best interest of everyone in mind, and yet they are the least tolerant of anyone who disagrees with them.

They are the first to hurl unsavory epithets at those who challenge their belief system. Many conservatives on the other hand are much more open to alternative views without demonizing those who oppose them.

This degree of intolerance is accentuated in the liberal African-American community, where anyone who has conservative views are considered an Uncle Tom or labeled in even more derogatory fashion. They do not recognize that they themselves are being extremely racist.

If they were to think about it seriously, they would recognize that the epitome of freedom is the ability to express your opinions whatever they are. They should be proud of the fact that the civil rights movement has yielded a variety of opinions within their own community.

It is time for all the liberals to start thinking about how they can promote freedom of expression rather than how they can herd everyone into their philosophical corral.

How else can one explain the left? Intolerant describes them to a "T".

I watched part of CPAC this past weekend - caught only the last bit of Ann Coulter's stuff, and then hung around to watch Ted Cruz.

But my guess is that Rand Paul wouldn't get the backing of the R's up there in DC, either in office, or out of it - as he is too "much" for them to handle. (Think Karl Rove)

Ted Cruz went against Feinstein, who really never answered his question, just gave a reply of 'what she's been doing in government.

And, Obama's got the White House all to himself, now that there are no tours - which he tried to palm off onto the Secret Service, and Carney said it was the White House that did it.  Guess they just can't NOT tell lies! 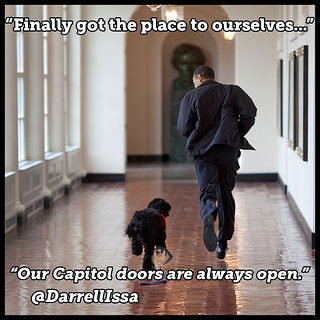