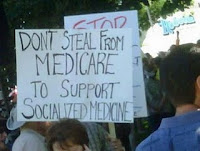 I was talking to a friend...okay, well, trolling him (and he was trolling me), and we were talking about the tea party. About how some say "keep your hands off my medicare" and on the same sign - "no socialized medicine". WHAT??

I didn't notice signs that were this blatantly...ridiculous, at the Tea Party Rally the town had last April 15th, but I think, that if polled, most that are older would say Heck no, keep your hands off my Medicare/Social Security, I paid into it, and I'm due it.

However, SS is a pay-go program, meaning when they worked, they paid for the retirees then. The workers now pay for their Social Security. And Medicare, they say "the employer pays part, and I pay part", its a fact that the person pays ALL of it, as they receive lower wages, because the employer has to take out part of their wage for it. Same with Social Security. Same with unemployment insurance.

Think, if all the money that you actually made, without government getting its grubby paws on it, how much you would actually get.

The friend I mentioned above is liberal, but we do agree on some things..such as the silliness of the above sign, and that when polled, quite a few of the tea partiers would not give up their SS/Medicare.

I was reading a book on economics, and it was brought up that if you saved $1200 a YEAR, and invested it for the long term in stocks, you would (with compound interest) have MORE than you would get from SS, and you'd see around a 4% return on your money, v. 1.5% with Social Security. You'd be having double what you get monthly with SS!

I was like :O I can save $1200 a year from what hubby gives me for groceries, clothes and other stuff.

I'm thinking also of changing my bank, as the current one pays about 1% interest on checking, and a local bank that has 4? 5? branches in the surrounding areas, pays 3%. Even 2% more would be a few bits more. Plus they have an Itunes checking account...you get a $20 credit for Itunes when you sign up, plus (forgot if it's quarterly or monthly) Itunes credit. Plus 3%!

Today is Wednesday, during the school year,, so we have AWANA tonight. Oh the fun of little kids!
Posted by Diane at 1:55 AM